Jenness is a NATURAL!

Even as a kid, whenever the family would go on road-trips to see the various Western States, Jenness was always drawn to the bow and arrow in the toy section (and REALLY wanted that full head to floor Native American Chief Headdress … but whatever …). She shot her first bow and arrow when she was 7years old when attending a summer camp, and throughout her growing up years, summer camps would be the only times she’d actually shoot, and it would only be a few shots within a short amount of time on ONE day of the week long camp. Not much time to really pick up much skill …

However, this past Spring, an opportunity arose for Jenness to take some TRUE archery lessons. It was the first time she had touched the bow since high school … and the first shot hit the bullseye of the SMALL target. And it wasn’t “beginner’s luck.” After session one, her instructor proposed tournament shooting. Jenness declined initially, but after a few lessons in … tournaments, equestrian shooting, longbow, compound bow … a new world has opened up. She EVEN took on her Instructor in a Tic Tac Toe Match … and WON! (See photo below):

Stay Tuned for more news on archery exploits, auditions, and other shenanigans! 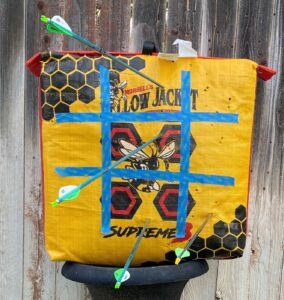